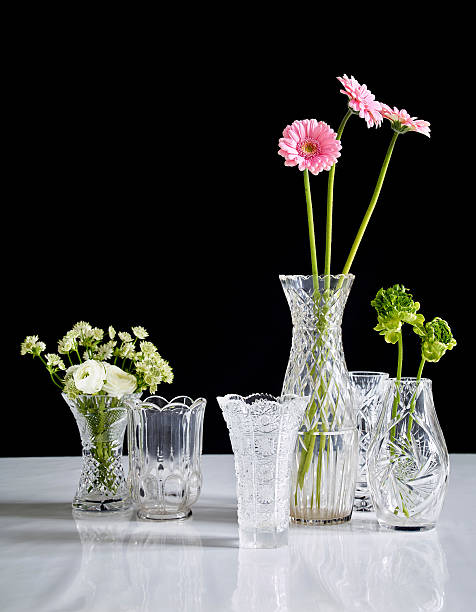 Last week, our oldest celebrated his 22nd birthday. He decided that instead of cake, he wanted fruit. He’s always wanted strawberries, but this was new. The morning of the big day I set the fruit on a large, white platter, but it just wasn’t nearly celebratory enough. So, I went back downstairs to gather my crystal. I set fruit in several crystal bowls, stuck a candle in a massive strawberry, and this momma was finally satisfied that the display was birthday worthy.

After the festivities, my husband and I were washing up all the pretty little dishes. We hit one of them with a fork, and ‘DING’, that perfect sound rang all over the kitchen. Mark said, “That’s a good piece of crystal.” I looked at it and said, “Really? I thought this one was.” We took the other piece and hit it (gently) and it kind of sounded like a ‘Dung’ more than a pretty little ‘Ding’.

It was so interesting. The good quality crystal didn’t look as fancy as the poor quality. It was just sitting there, unassuming, knowing what it had going for it. It didn’t have as fancy as a pattern. It didn’t have the decorative features of the other piece. It just sat there, knowing that what it was made of was right for the occasion.

The not so quality piece of crystal was ornate, decorative, and very showy. It screamed, “I’m here.” When it made a sound though, the truth came out. I realized that all the ornamentation was to distract me from knowing the truth.

These pieces of crystal reminded me that I need to make sure the sounds that I make are in keeping with who I am in Christ. They also reminded me that even when I’m impressed with how someone looks, or sings, or even preaches, the sound they make when they get “hit” proves what’s on the inside. Is it praise, or complaint? Is it a temper, or grace? Is it Christ, or self?

So, what sound should come out?

Ephesians 4:29 says, “Let no filthy talk come out of your mouths, but only what is good for building up as the need may be. This way you will give grace to those who hear you.”

I confess, I often get caught up in the first part of this verse. I say to myself, “Well, I didn’t actually cuss, so I’m good.” I lose the next part, the part where I am ONLY to say things that build people up.

Sound impossible? If I am just using my best effort to look like a great quality Christian instead of actually being one, it is. Just like the crystal at Wes’ birthday. The sound I make tells on me every time. Just because I’m not cursing doesn’t mean I’m building people up. In fact, if all I’m doing is biting my tongue, the sound I am supposed to make (building people up) never happens.

Watchman Nee, in his book Sit, Walk, Stand – The Process of Christian Maturity, says this: “Too many are caught acting as Christians. The life of too many Christians today is largely a pretense. They live a “spiritual” life, talk a “spiritual” language, adopt “spiritual” attitudes, but they are doing the whole thing themselves. It is the effort involved that should reveal to them that something is wrong. They force themselves from doing this, from saying that – and how hard they find it all! It is just the same as when we Chinese try to talk a language that is not our own. No matter how hard we try, it does not come spontaneously; we have to force ourselves to talk that way. But when it comes to speaking our own language, nothing could be easier. Even when we forget all about what we are doing, we still speak it. It flows. It comes to us perfectly naturally, and its very spontaneity reveals to everyone what we are.”

When I depend on Christ, through the Holy Spirit He has already placed inside of me, the sound I make is Him, not me. Instead of a pretender, He makes me the real thing. Instead of just appearing to be Christ-like, He makes me like Him through and through. Still sound impossible? It would be without assurances like these:

Ephesians 3:20 – “Now to the one who can do infinitely more than all we can ask or imagine according to the power that is working among us.”

Philippians 2:13 – “For it is God who is working in you, ⌊enabling you⌋ both to desire and to work out His good purpose.” He gives us the “want to” and the power to actually accomplish it.

Let’s stop pretending and let Him do His perfect work in us. Let’s rest in the fact that when we are resting in Him, He cleans us up, cleans us out, and replaces us with Him. Then, when a hit comes our way, the sound we make is something that would bring Him glory and will come as naturally as speaking our native langauge. Only God can do that in me, and in you. Let’s allow Him do it.