Psalm 119:32 in Young’s Literal Translation says, “The way of Thy commands I run, For Thou dost enlarge my heart!”

So many times when I imagine my Christian life, I picture a slow plodding, a testing of each step to make sure there are no land mines and honestly, a rather slow experience overall. The psalmist in this passage though describes a Christian life that is filled with running. He is so sure of God’s commands that he is able to run forward because he is sure of the steps that God has before him.

Are we able to run as well?

We are. When we know God’s commands we are able to not just meander along, but run. We can move faster than we imagined because we can be sure of our steps. We don’t have to second guess everything because our path is clear before us.

So, what are some of our Lord’s commands?

Jesus Himself said that the greatest command is to love the Lord our God with all of our heart, soul, mind and strength (Matthew 22). So, we can run in that experience with Him. There is no need to be shy in His presence, or to avoid Him. He has called us to love Him and He has made a way in our hearts for that to happen, so we can run into His arms with complete abandon knowing that loving Him with unrestraint is His command.

Another sure command of the Lord is to love our neighbors as ourselves. In fact, Jesus calls this the second greatest commandment (Matthew 22). So, we know that this is another path in which we can run.

I love the second part of Psalm 119:32. It tells me that when I run in His commands, my heart enlarges. My love can’t help but grow. So, maybe I don’t feel like encouraging anyone today, but I know I need encouragement. Instead of waiting and sulking for someone to encourage me, I run in His commands by loving someone as I want to be loved (in this case, a simple word of encouragement) and He enlarges my heart. I end up feeling encouraged myself because He is always faithful to enlarge my heart when I am running in His commands.

I can’t help but think of The Grinch and how “his heart grew three sizes that day.” Maybe that’s why we all love that part of the movie so much (the 1966 version!). Our spirit knows that’s what God does for us when we run in His commands. He enlarges our hearts. He puts a goofy grin on our face and we are able to serve others in genuine love.The truth is when we are faithful to run in our Lord’s commands He fulfills His part of the bargain. He empowers us to do things we wouldn’t normally do. He lifts our spirits in ways we can’t imagine. He enlarges out hearts to love as we could never love before, even more than Mr. Grinch.

So, let’s lay down the idea of a quiet, slow Christian life and start running in His commands. Let’s stop looking for land mines and take Him at His Word that He will enlarge our hearts to love our neighbors as ourselves. Let’s stop limping around injured and afraid and run into arms wide open for discovery. Let’s pick up the pace and run! 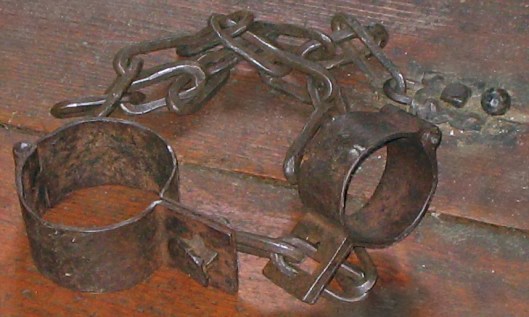 Psalm 105:17-19 says, “He [GOD] sent a man before them, even Joseph, who was sold for a servant: Whose feet they hurt with fetters: he was laid in iron: Until the time that his word came: the word of the LORD tried him.”

Joseph really went through it, didn’t he? If you are unfamiliar with his story, or just want a refresher, his story begins in Genesis 37 and goes for several chapters, but for now we are going to focus on what David says about him in Psalm 105.

God in His sovereignty knew what it would take to get Joseph to be the man that he needed him to be. God knew it would take many years of chains and servitude, but Joseph didn’t know that. Would Joseph be able to believe God even while in chains? God needed Joseph to be the man He knew he could be. Chains is what it took. Joseph allowed the chains to do their perfect work so that when the time of his word came, he would be ready. The question is, “Will I allow the chains to do their perfect work in me?”

The Psalmist goes on to say that Joseph’s feet were hurt with fetters. I can’t help but think of Psalm 51:8. It says, “…let the bones which Thou hast broken rejoice.” Sometimes, God has to allow our feet to be hurt in order to get us to bow. Otherwise, we will stay standing forever. We convince ourselves that our hearts are humble, but God has called us to our knees. We need to be in the place where if God needs to break every bone of our body in order to get us to be the people we are designed to be, we gladly accept His decision. We need to be able to sow with a view to righteousness (Hosea 10:12) even while in chains.

Oftentimes, God allows chains to hold us back for a time because we need to mature in Him. We need to rest in Him, His timing and His sovereignty. We might feel as if a fetter is an individual, or a church, when in reality God is breaking the bone that is too rigid to bend.

Maybe you feel like God has called you to work with college kids, or the elderly, or any number of things, but nobody seems to “get it”. Instead of trying yet another church, or media blitz, or a friend you are hoping will understand this time, maybe you need to acknowledge that the time of your word has simply not arrived. Maybe this is your time to be still and know that He is God. Maybe this is the time to rest in Him and His timing and truly put to the test if you really believe He is sovereign. Maybe God knows that you needed the hope of the dream, but the journey needs walking through first. Let’s not get frustrated. Let’s get humble. Let’s be the servants we are called to be in the places we are at.

When I think of Joseph though, I can’t help but remember his forgiveness, his faithfulness and his restoration with a family he thought he had lost forever. When we allow our time in the chains to train us, that’s what God can do. When we allow the bones He has broken to be healed in His ministering hands, that’s what God can do. When we bow to Him when our feet are hurt in the fetters, He makes our feet like hinds’ feet and makes us to walk on our high places (Habakkuk 3:17-19). That’s what our God can do.

O Lord, we are in awe of You today. You are majestic in holiness, fearful in praises, doing wonders and there is none like You.

You are beautiful beyond description and too marvelous for words. You are enthroned on high and You are God alone.

You are Sustainer, our Refuge and any perseverance that we may have. You are our very present help in times of despair and joy. You never leave us, or forsake us and You are the same yesterday, today and forever. You change not and O Lord, we confess we do not wish You to change. You are perfect and glorious, indescribable and all powerful. You are righteous in all Your deeds. Why would we ever want it any other way?

We are not worthy to unlatch Your shoes, yet you choose us to fulfill Your will on this earth. Make us worthy of that call, O God. Yet, in praying that I know that our righteousness will always be as filthy rags. We will always have an agenda, a selfish ambition to seek the praise of others. Not a lot Lord, just a little, when all praise, honor and glory should be Yours alone. Forgive us, Lord. Be our righteousness. Cover us with Your righteousness so all that others see is You.

You are all wisdom, all knowledge, all power, yet You allow us to abide in You and touch the hem of Your garment. We are in awe of You.

Help us to know that we must see the mountain in order to see the miracle and help us to trust You to remove that mountain, or when the mountain is looming ever closer that You have already given us the strength to climb it. You are God and we are in awe of You. No words can explain You and nothing that anyone can say, or do thwarts Your plan. You are God.

We are in awe of You today.